This is the first in a series of how-to blogs where we dig into the process of restoring unhealthy soils. First and foremost, we look at the backbone of a healthy soil: its structure. Why is structure so elemental, and how could mainstream agriculture fail to protect it? There’s no magic wand, but we take a look at a few regenerative solutions that can kickstart repair.

Healthy soils work like healthy communities. Like people, individual plants rely on structure, processes and pathways to receive nutrients, to grow and produce themselves, and then sew back into the ground.

Soil structure is the physical property of soil that determines what percentage of it is air and water and what is solid material. A healthy, well-aggregated soil should be 50% air and water, 45% minerals, and about 5% organic matter and microorganisms.

The physical structure of soil is built by micro- and macro-organisms that break down and rearrange its organic matter. Various mechanisms are responsible for soil structure, from the burrowing activities of earthworms that create channels for nutrients to circulate, to the biochemical activities of bacteria-secreting glomalin (a special soil glue that binds organic matter and soil mineral particles).

In conventional agriculture, soil structure is the element most often out of balance, and the factor most likely to limit yields in the long run. Poor structure – especially overly compacted soil – stifles the growth of plant roots, preventing them from penetrating further. This limits the area from which roots can draw moisture and nutrients, stressing the plant and contributing to yield loss. Poor structure also reduces water infiltration, air exchange in the root zone, and can lead to anaerobic and disease conditions. 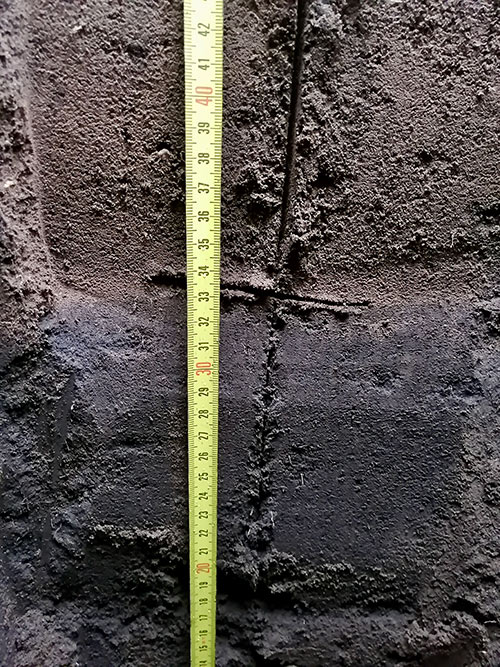 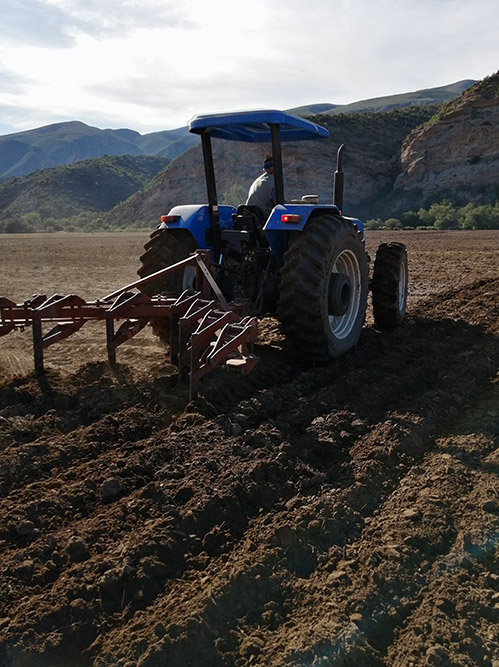 A compaction layer, sometimes called a plow pan, is a layer of soil that has been compressed by tillage equipment. This compaction can be so severe that it restricts the movement of water and oxygen, causing an anaerobic layer (the darker soil in picture above) to form.

In conventional agriculture, the remedy for compaction is tilling the soil. The problem is, tillage begets more tillage. And once you mechanically destroy the delicate food-web structure of micro-organisms and macro soil fauna, you are forced to continue to erode it to ensure sufficient pore space for plant roots to grow and oxygen and water to enter. Tillage creates a microbial imbalance in the soil, it introduces excess oxygen in the system causing a bacterial explosion that consumes the soil’s organic matter faster than it can be replaced. Ideally we aim for a stable balance of fungi and bacteria (called the F:B ratio) of around 1:1, but tillage damages fungi and favours the rapid growth of bacteria. Fungi generally build up soil structure by stabilising carbon in the soil for long term storage, so a loss of your fungal component means rapid soil structure degradation.

It might boost production in the short term, but tilling reduces long-term resilience. After ploughing, the soil tends to compact more quickly; following heavy rainfall and irrigation, micro-erosion causes finer particles to clog all the necessary pore space. 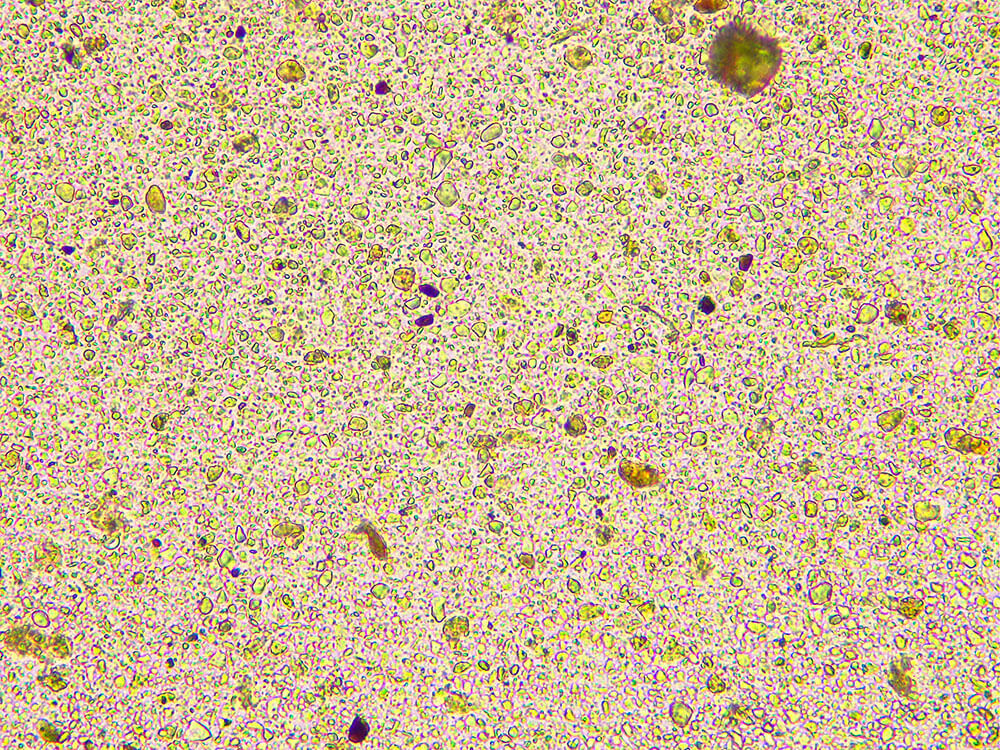 Degraded soil structure at 400x magnification. Low organic matter and very uniform distribution of soil particles mean that this soil lacks the pore space for air and water to easily enter. This leads to waterlogging, drought susceptibility, and anaerobic disease-causing conditions, which ultimately reduce the space for plant roots and cause stunted, low-yield crops.

Naturally, the solution is to opt for no-till. Reducing and then eliminating mechanical disturbance from your soil will give the soil structure mechanism a chance to reboot and repair itself. Microorganisms will begin to recolonise and insects will start to reconstruct vital pathways.

Unfortunately, the transition from an intensive tillage system to a perfect, bouncy, no-till soil is sometimes a difficult and patient process. The mechanisms (microbes and organic matter) that normally build the soil have been so mistreated that they need a lot of time and input to recover. 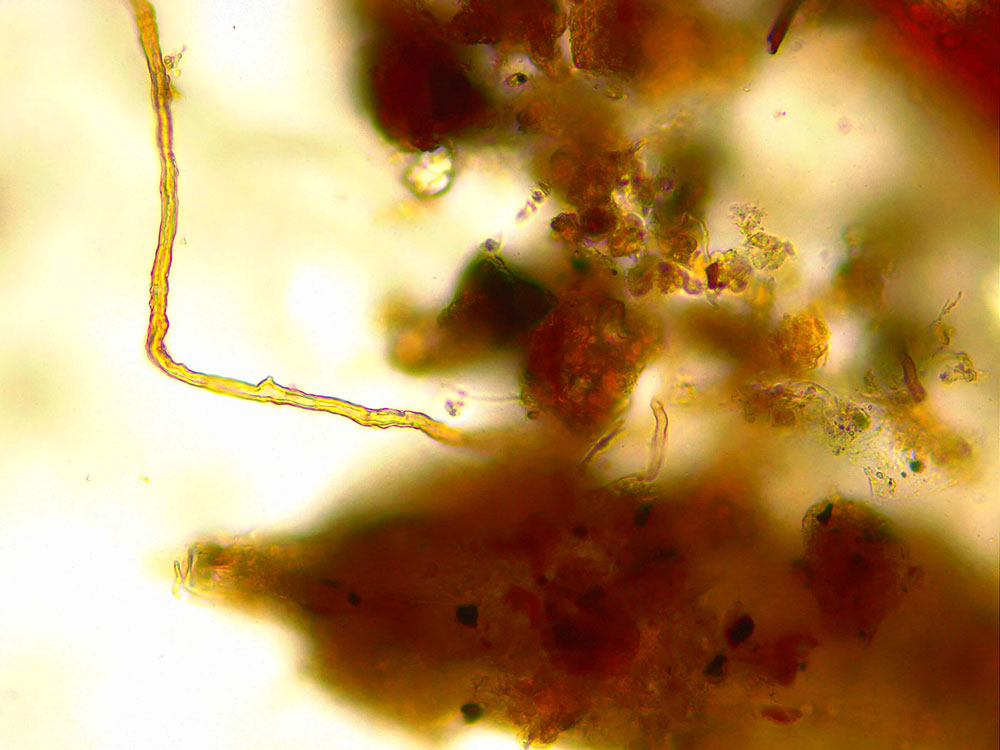 A healthy micro aggregate (at 400x magnification) shows mineral particles and organic matter glued together by fungi. These structures are like super skyscrapers or mega malls of the soil-verse that house microbes, hold water and essential nutrients for plants to use, making the soil resilient.

Fortunately, there are a few tools that a farmer can employ to support this transition without suffering the yield losses and production difficulties usually assumed during the transition to regenerative farming methods.

Keep an eye on our other social media channels as we share some practical tools to support the transition to no till.

In our next blog post, we’ll dive into soil chemistry as we explore this three-part road to soil health.