The soil food web is a complex living system we can hold in our palm, and yet scarcely grasp: in a single teaspoon of soil there are more living organisms than people on the planet. Soil microbes are responsible for perpetuating the ongoing carbon, water and nutrient cycles that need to be in balance for sustainable agriculture. Regenerative agriculture is all about creating an environment that lets these organisms do what they do best.

Healthy soils are busy hotbeds of activity in which living organisms – visible and invisible – work in an ever-constant cycling and exchange of nutrients.
Image credit: Gareth Hubbard

This is the third and final blog in our series about the three tenets of healthy soils. In the first, we examined soil structure, the most visible component of soil fertility; in the second, we looked at soil chemistry and the nutrients vital to feeding it; finally, we explore soil biology, the engine behind it all.

What is soil biology? 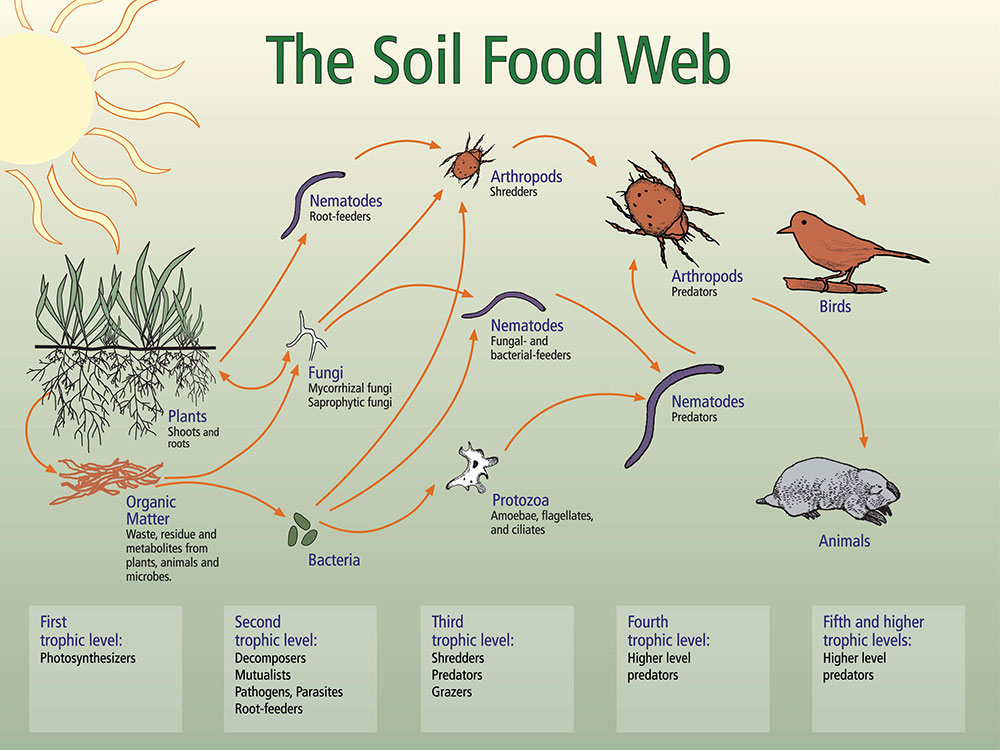 The soil food web is a complex interaction among plants and micro- and macroorganisms that moves energy through the soil environment.
Source: NRCS USDA

Biology refers to all living organisms and their interactions. Examining the biology of the soil food web, we can start by looking at plants (the first trophic level in the image above). Plants are the primary producers that transform sunlight into the chemical energy that sustains the entire ecosystem. Although we can see them plainly, there’s more to plants than meets the eye: half of their structures exist within the soil in their root systems, facilitating complex biological interactions with other soil biota. Plants are either dead and their material is decomposed by soil organisms; or they actively exchange their sugars for nutrients and water provided by microorganisms (which microorganisms can access more efficiently), via their root systems.

In the second trophic level you find the primary decomposers, bacteria, archaea, fungi and some plant-feeding nematodes. Even though bacteria and archaea are genetically quite different, we can group them together since they function in similar ways. They constitute the workforce of the soil and usually dominate the environment in terms of living biomass, especially in modern agricultural soils that have a lot of disturbance. Both bacteria and archaea perform a diverse set of functions that range from degrading organic matter and excreting organic acids that make mineral elements more soluble, to fighting pathogens that attack plants, insects and fungi. Each species of bacteria is usually extremely specialised, secreting one set of enzymes to work on one type of plant or food-source, which means that thousands of bacteria species are necessary to build a functional soil community. Bacteria are quick to multiply but can also stay dormant if conditions are not suitable. 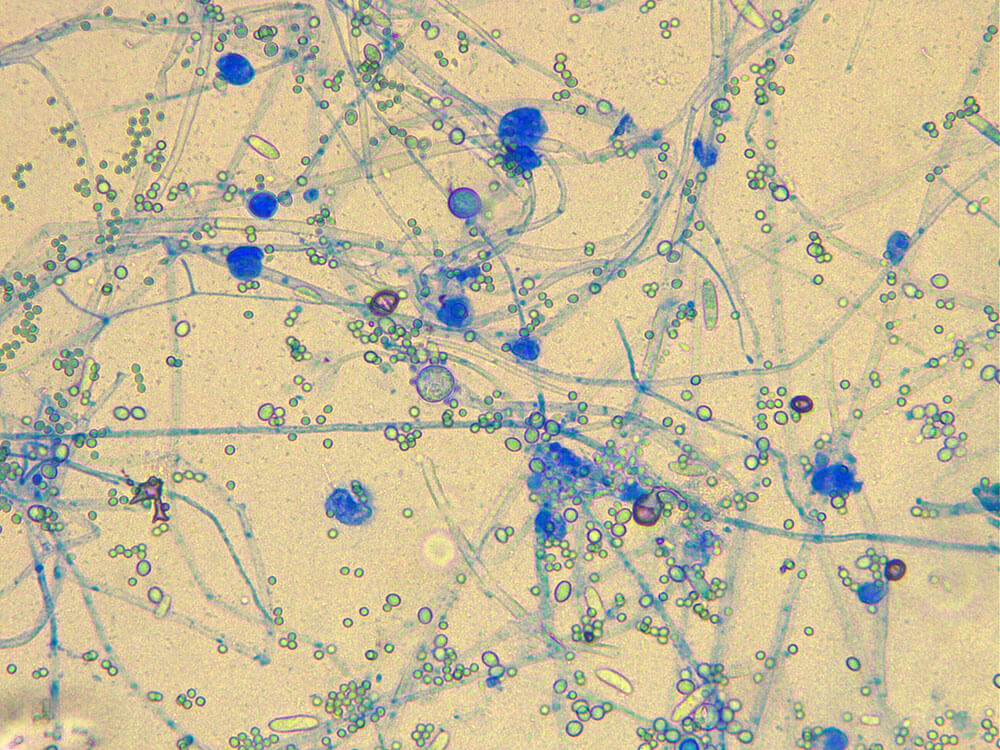 Soil fungi form complex webs of life and have an essential function in building soil structure and facilitating the transfer of nutrients. Here, a mixed culture of soil fungi grown on agar and stained blue is examined at 400x magnification to show complex networks of multiple fungal species.
Image credit: Daniel Fourie

Fungi exist on the same trophic level as bacteria, and like bacteria work hard to fulfill several critical functions. But fungi are the highly skilled workers of the soil, adept at handling multiple complex tasks: they can secrete a variety of enzymes to break down complex plant tissues like cellulose and lignin, and adapt the enzymes they use to the type of materials present. Fungi form complex relationships with plants and bacteria, and facilitate a trade of resources between the two. They live longer than bacteria and generate long lasting carbon structures from their mycelium that greatly aid in building a soil’s organic matter and structure. 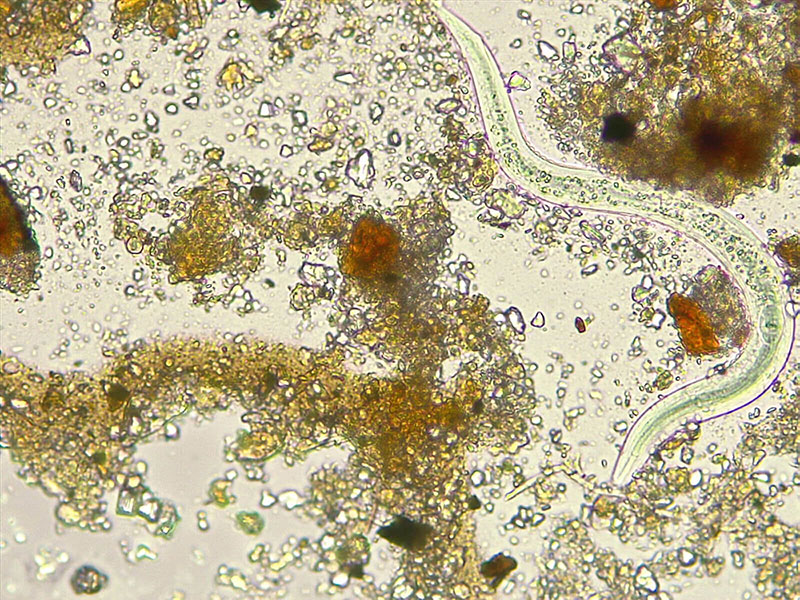 Climbing to the next level in the soil food web, we come to protozoa, predatory nematodes and microarthropods (insects). These are the predators in the soil that feed on bacteria, fungi and one another, depending on their size. They ensure the active cycling of nutrients in the soil by consuming high numbers of bacteria and fungi and secreting very simple waste by-products in a form that plants can easily absorb. Predatory organisms keep population dynamics in check; soils with a healthy predator population often have lower disease pressures, thanks to them. Because they are larger and live longer than the bacteria and some of the fungi, these organisms are highly sensitive to soil disturbance. In conventional agricultural soils, these populations are often under pressure and lack diversity.

The fourth and fifth trophic levels incorporate higher predators, like larger insects and mammals, but the soil microenvironment is still the source of their food. Every earth-dwelling creature depends on an underlying functional ecology in order to thrive.

Greater than the sum of its parts

Soil microbes – bacteria, archaea and fungi – are the soil architects that convert dead minerals into living nutrients used by plants. Thanks to them, nothing is wasted. The more active and in-balance these biological players are, the more healthy and robust the food web becomes, which will also be evident in the soil’s chemical and physical characteristics, too. If farmers can preserve and support this system, their crops can be regenerative and self-sustaining, avoiding any need for chemical or mechanical inputs. 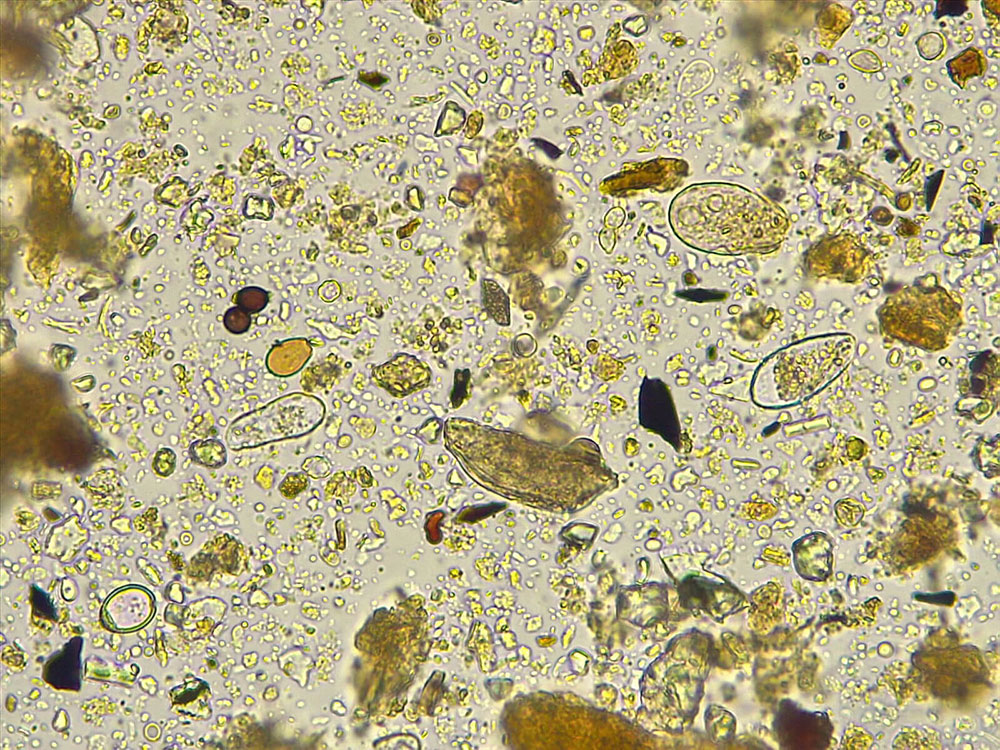 A healthy soil ecology is measured in its species diversity. In the image above you can see multiple different species of protozoa (the oval creatures are mostly testate amoeba), fungal spores, and a good population of bacteria (small block dots), imaged at 400x magnification. This is from a sample of excellent quality vermi-compost; it exemplifies how complex and beautifully diverse the soil food web can be.
Image credit: Daniel Fourie

Now that we understand how intricate the soil food web is, how do we go about supporting it? Regenerative practices are a good place to start. Here are the fundamentals:

There are a few more good practices when supporting soils.

Avoid commercial microbial inoculum. The best case scenario is that a commercial microbe won’t survive for very long in the soil. But worst case, you might be introducing a very dangerous alien invasive species into your soil microbiome. This could severely disrupt the balance in your soil food web. Trichoderma is a great example of this danger. These are fungi that have been isolated in labs as a popular biological control for fungal diseases (fusarium or phytophthora), but they are extremely pathogenic and attack the other 99.8% of beneficial fungi that make up the soil food web.

If you need to inoculate microbes to help restart your soil food web – as is very often the case in conventional agricultural soils transitioning to regenerative – you can create your own from local indigenous microbes. This could be as easy as making your own good-quality compost from locally sourced materials, or as complex as creating your own IMO (indigenous microorganism) inoculum from healthy natural forest soils with techniques like Korean natural farming. Every farmer already has the raw materials to support their unique soil food web. 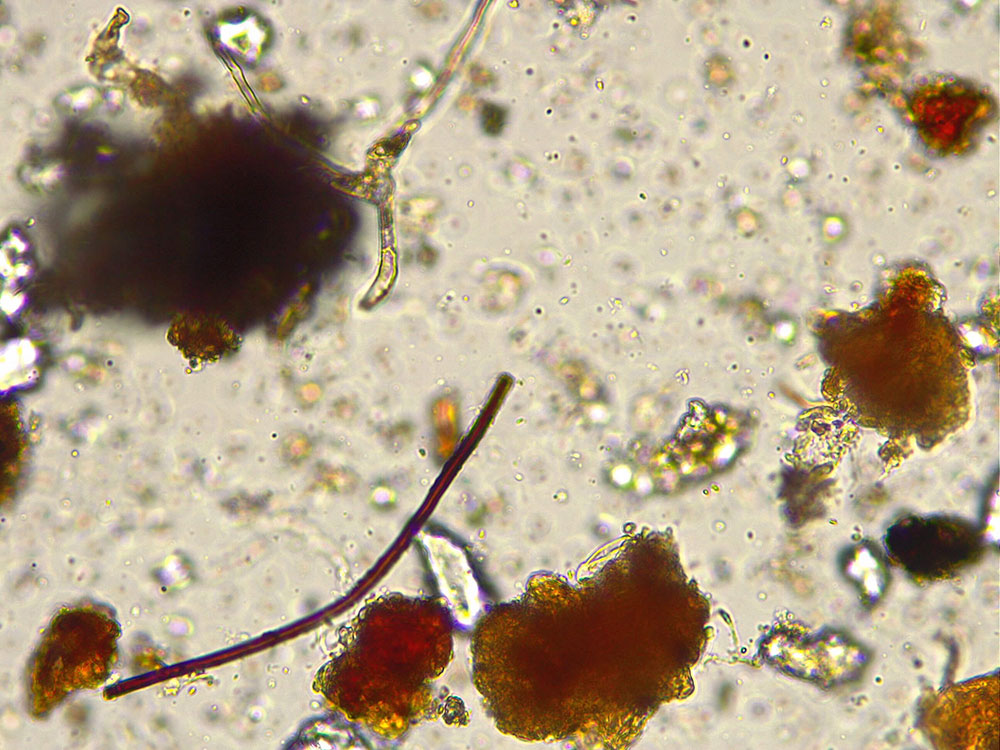 Agriculture can learn a lot from processes that have evolved over billions of years, which is why the basic premise of regenerative farming is ‘nature knows best’. If we can understand a little bit about how it works, or at least mimic it, we can create conditions that let living organisms do the jobs they’re already hardwired to do.

We’re not reinventing this web – we’re just re-entering it by transitioning to regenerative agriculture.