The many flavours and functions of the honeybush plant

Measure by sweet measure: the dynamic honeybush has many gifts and uses and, slowly but surely, we’re uncovering its full potential.

Honeybush is at the centre of some exciting innovation in the food, cosmetic and nutraceutical industries. And as both niche and well-known brands develop tea infusions featuring honeybush as their key ingredient, increasingly, it’s becoming a fixture on the international tea market. Entrepreneurs are busy experimenting with new applications, and science is uncovering potential health properties, and a flurry of honeybush products are appearing in the global marketplace, boosting the profile of this historically overlooked plant.

Its commercial rise is a relatively recent phenomenon, but honeybush is hardly a new discovery. For centuries, the Khoi and San, southern Africa’s earliest people, used the endemic plant medicinally. As a tea, it has been brewed locally for at least three hundred years. Today, approximately eighty-five per cent of South Africa’s annual honeybush harvests are exported, the majority of which is sold in bulk form. 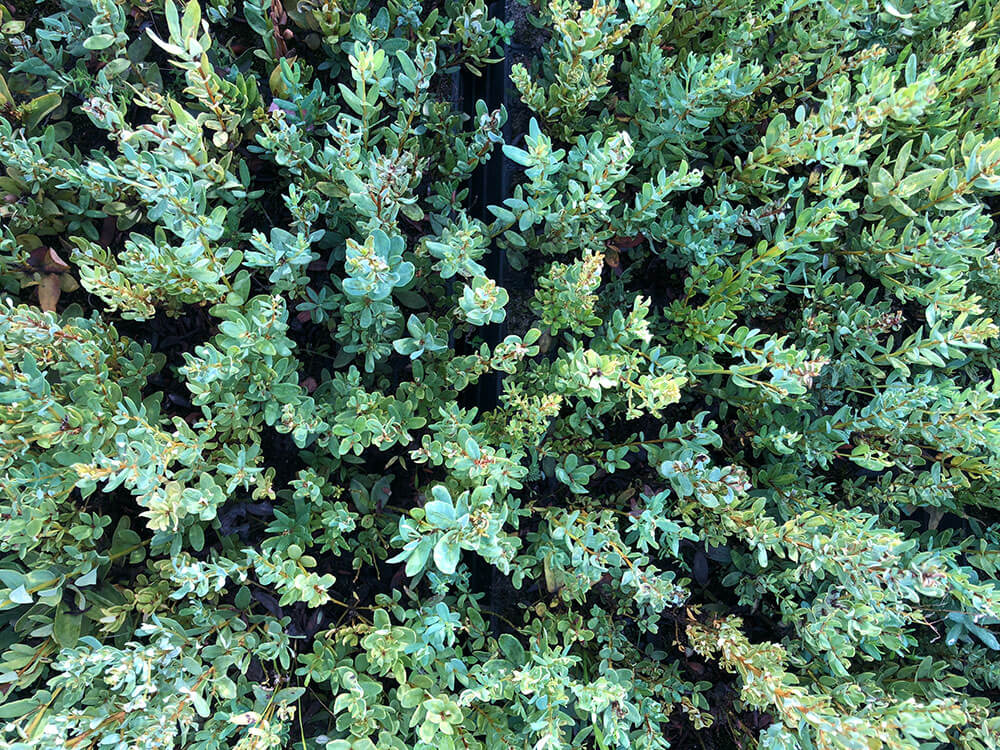 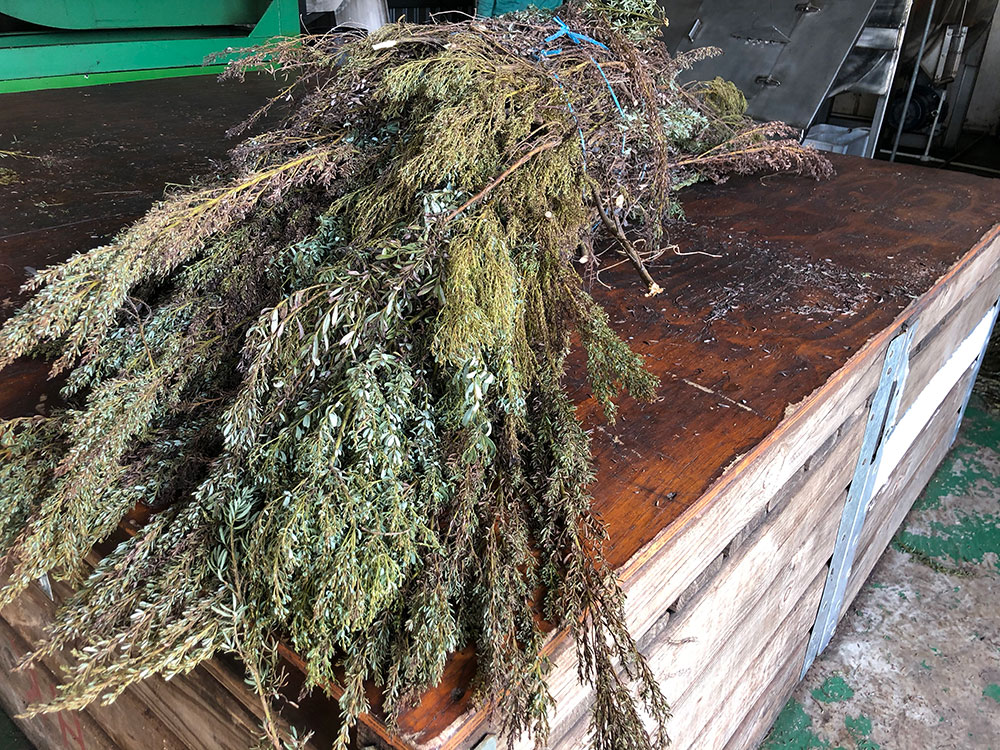 Honeybush on the bush and a bushel of Langkloof honeybush bound for processing.

While the fact that it is rooted in the diet of early cultures implies some health-giving qualities, it is still unwise to make absolute statements about the plant’s power to treat and heal and prevent. Grounded is amongst the most enthusiastic proponents of honeybush, but we’re also deeply invested in the full story: we care about the who, where and how of its origins. Especially as an emerging industry, we hope that honeybush is able to retain all of its verified and yet-to-be confirmed natural goodness.

Honeybush is the close cousin of rooibos (“red bush”, Aspalathus linearis, also endemic to the fynbos biome), which has been a well-stocked pantry item for many decades. Honeybush tea shares the golden-red hue of rooibos tea but possesses a flavour all its own. Tea connoisseurs agree that the diverse taste notes possible with honeybush tea – like citrus, caramel, the natural honey-sweetness – make it particularly interesting as a base. Wild-harvested honeybush is especially sought out for its nuance and character. 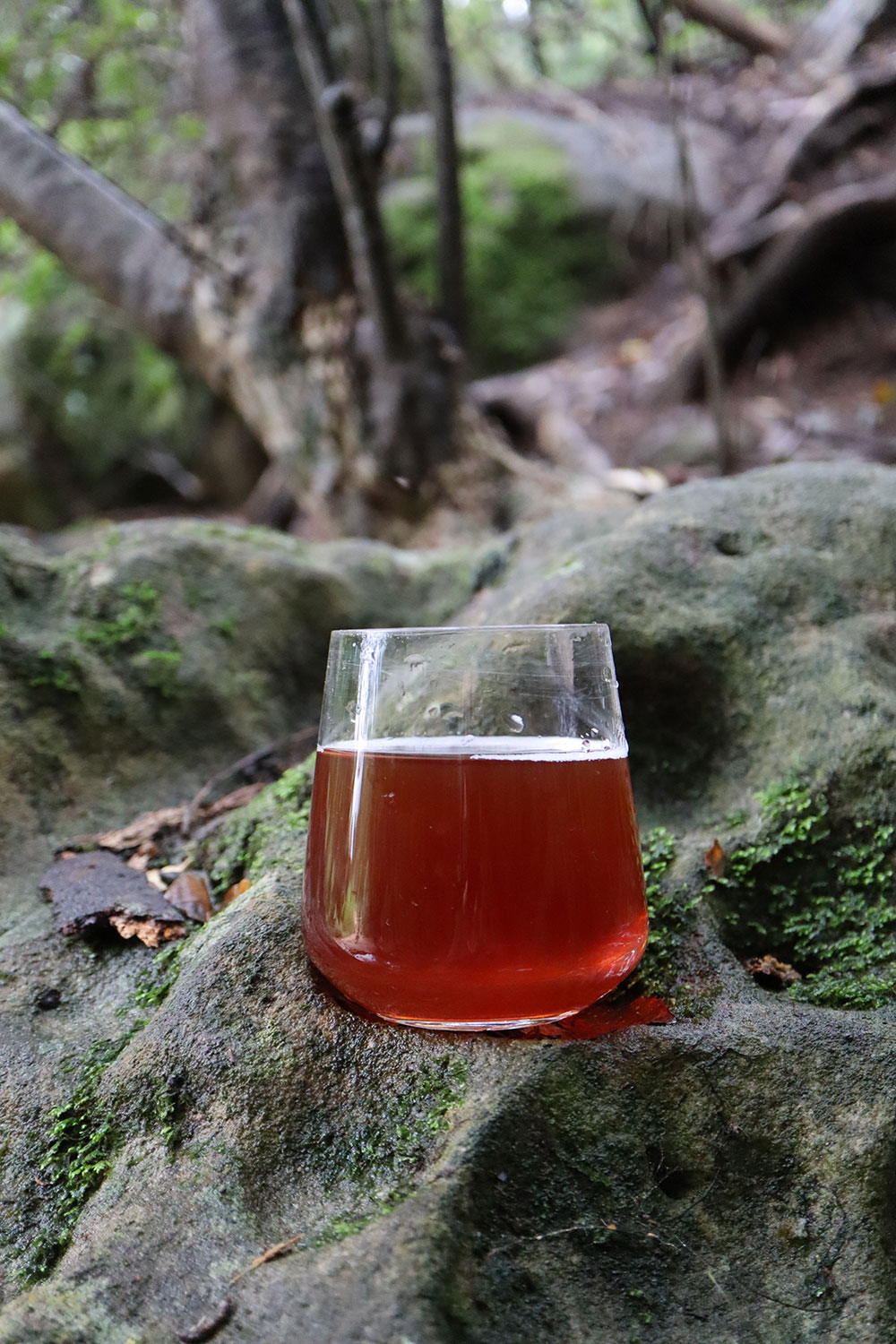 The rich, reddish hue of honeybush is similar to rooibos, but its earthy, citrus, caramel notes make it distinct.

For those still unsure about the difference between rooibos and honeybush, here’s a quirky, informal video, which does get the basics right.

Like rooibos, honeybush has rightly been promoted as a rich source of antioxidants. Preliminary studies show that honeybush might have properties capable of warding off cancer or fighting signs of ageing, but scientific consensus on this matter is yet to be confirmed. We like this article in Matcha Alternatives because it offers some nuance to the debate around antioxidants: what they are, and what false claims purport that they do. In spite of its critical lens, the article identifies honeybush as possessing the highest levels of antioxidants amongst any herbal tea. 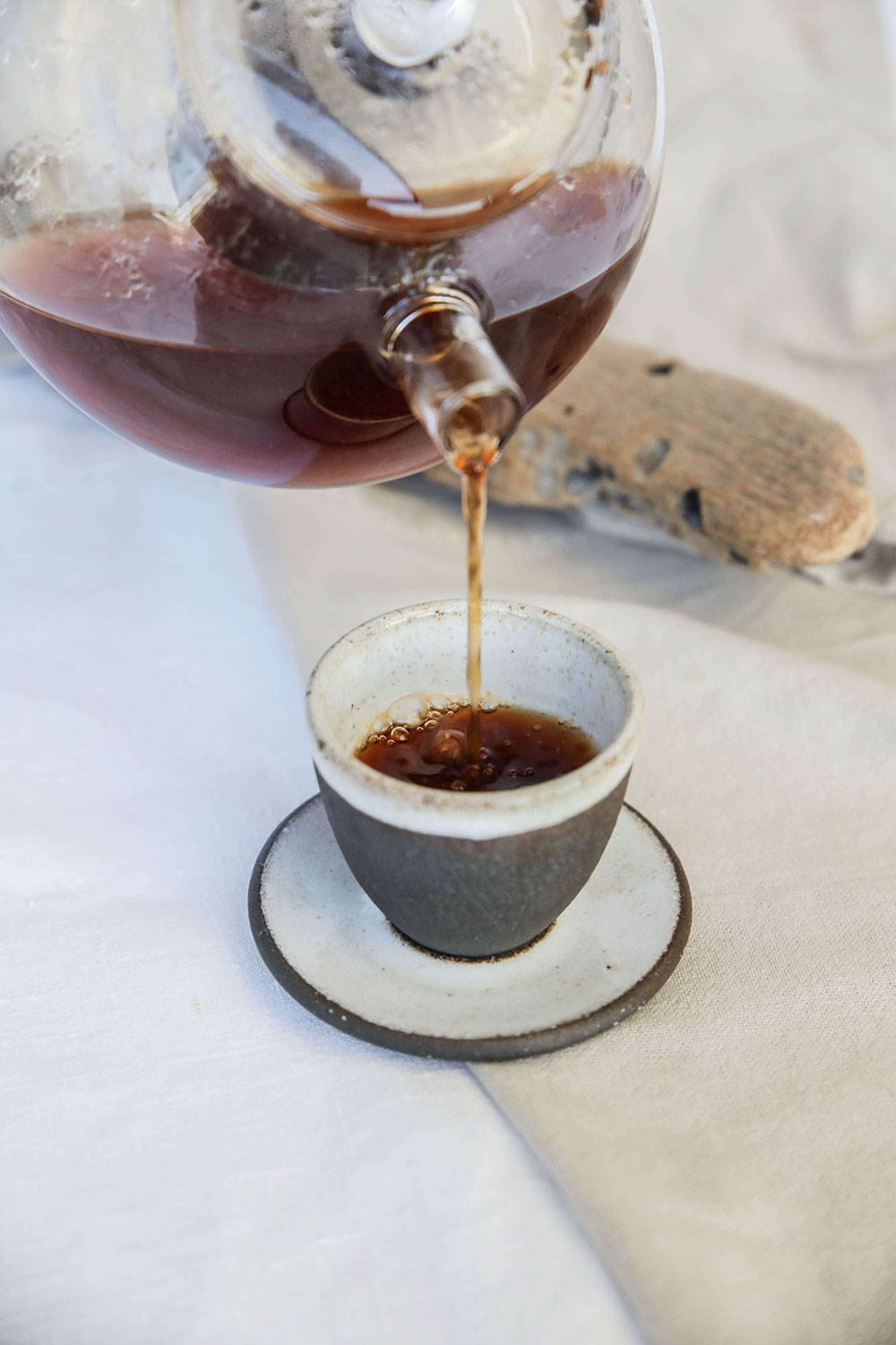 The how-to of drinking it: a few different takes

As a tea, there are many ways to prepare honeybush. Connoisseurs debate the best style to brew it as a loose leaf: farmers in South Africa’s Langkloof insist that it has to be simmered on the stove for about thirty minutes for the tea to become nice and strong; Mingwei Tsai, expert tea blender and consulting partner on Grounded’s own blends, prefers to let it steep in boiled water for seven minutes in a glass pot. 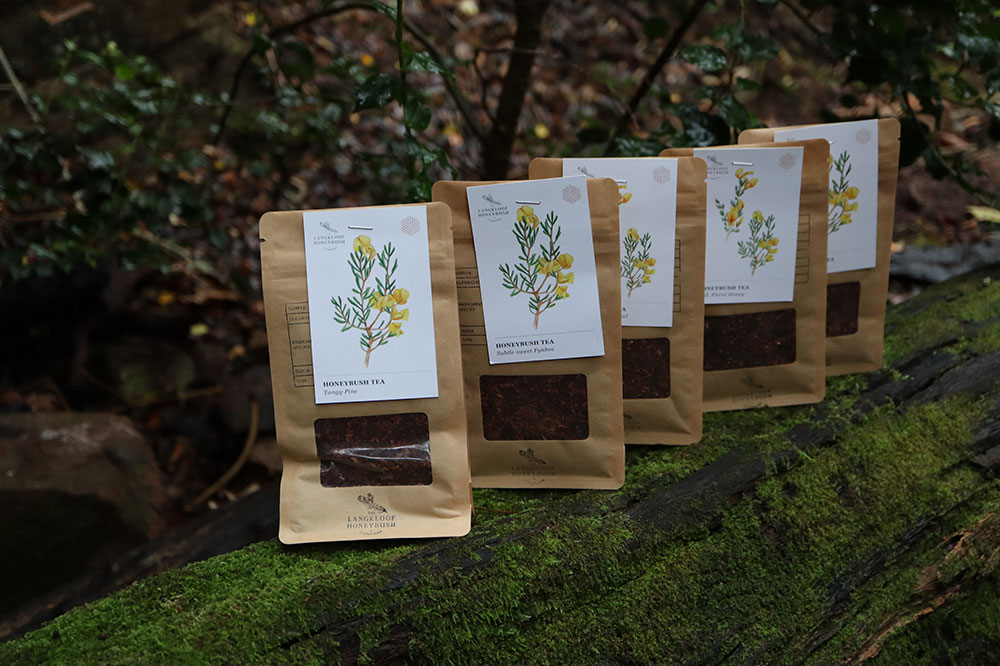 From earthy to elegant, the Langkloof Honeybush Co.’s signature blends hit all the right notes.

Naturally caffeine-free, honeybush is excellent for blending. Rooibos-honeybush is a favorite combination in South Africa, but it also pairs beautifully with aromatic, floral and fruity flavours. Tsai developed a range of honeybush blends for Grounded, amongst them is a honeybush-chai, which is a delicious caffeine-free version of this classic mix. Otherwise, honeybush paired with ginger, Earl Grey, orange and cinnamon, and mint, are just some of our diverse blends. Drawing on its ancient roots, we’ve also created an African Pride blend, which uses only plants endemic to the Continent.

One of our team’s favorite applications is as an iced tea. Simply steep the tea and place it in the fridge, or chuck honeybush in cold water and let it infuse over time. Because it has a naturally sweet flavour, drinkers seldom need additional sweeteners. Here’s a recipe for brewing your own honeybush iced tea at home.

One of honeybush’s greatest potential applications is as an ingredient in the ready-to-drink beverage market. For brands making iced tea, kombucha, or non-alcoholic beverages, it works as a characteristic flavour and colour addition to products. Again, the slightly sweet and earthy flavour makes it extremely versatile. And as craft spirits and botanical distillations increase in popularity, honeybush is explored as a principal ingredient (as evidenced by the gin market’s recent explosion of honeybush infusions).

A natural face-life for the beauty & wellness industry

Brands are starting to turn to honeybush as a fresh alternative in the cosmetic industry. The antioxidant properties make it as attractive as rooibos and green tea extracts in topical formulations, but its unique properties give old products a new feel.

As a food supplement, honeybush is increasingly popular, although scientific consensus on the benefits of taking these supplements is yet to emerge. However, many studies are underway and it is an interesting space to watch, since this market segment is growing at a rapid pace.

Recent research at Stellenbosch University has shown that certain compounds in honeybush have antifungal and antibacterial properties, giving it potential as a natural preservative. As consumer awareness increases about the chemicals and preservatives in our food, the food and beverage industry grows even-hungrier for natural alternatives. From our experience with rosemary extract, we know that there is huge opportunity here. If the compounds can be extracted locally, this could be big news for South Africa. You can read more here.

Grounded’s resident botanist Elzanne Singels rolled up her sleeves for some kitchen experiments, which explore a simple range of honeybush applications anyone can try at home.

Martini with a sweet twist:
Honeybush gives its flavour and colour to alcohol generously when infused. A classic martini using the resulting infused gin is filled with the rich aromas of the tea, together with the phenomenal amber colour. The drink is very well paired with cinnamon and rose geranium. 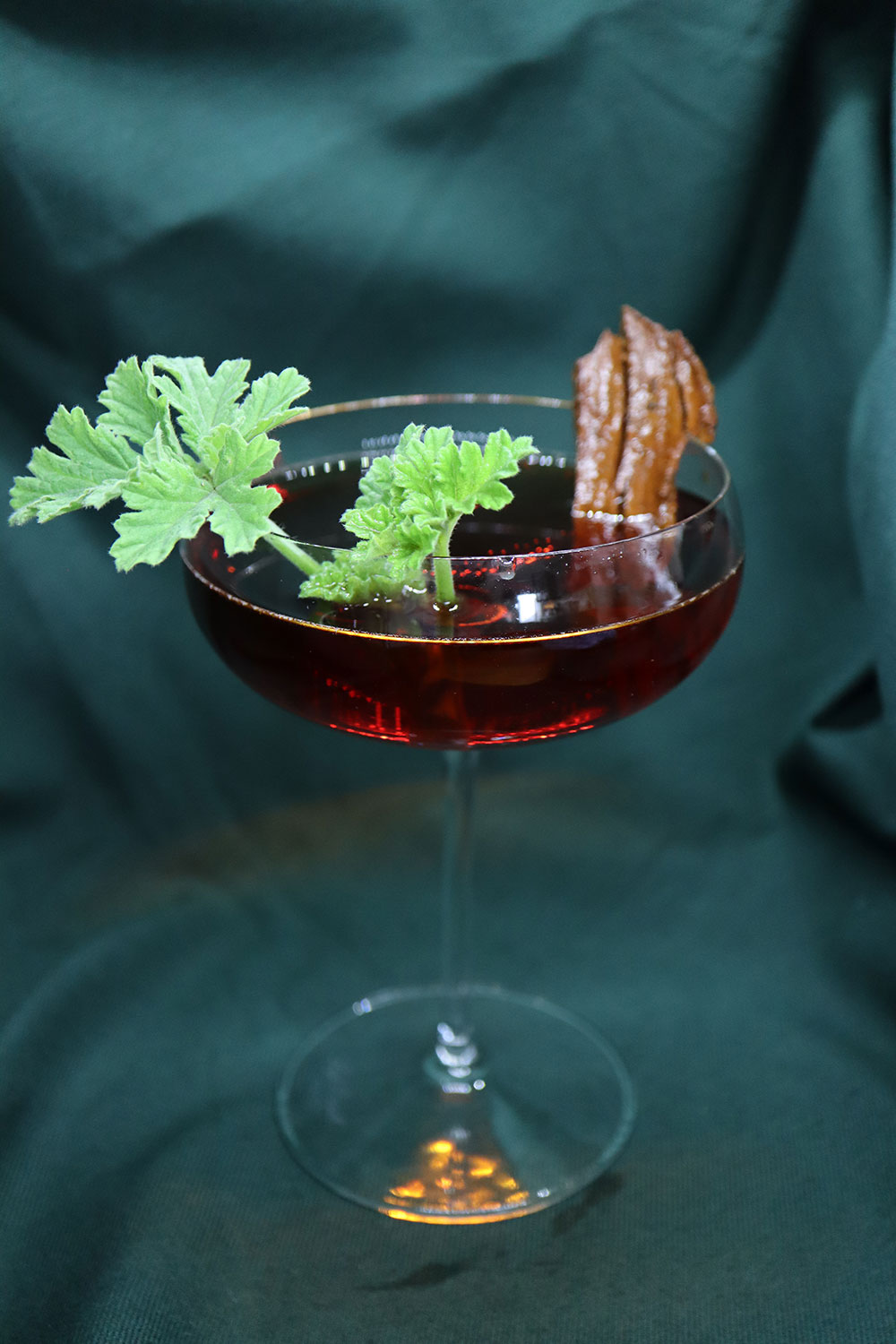 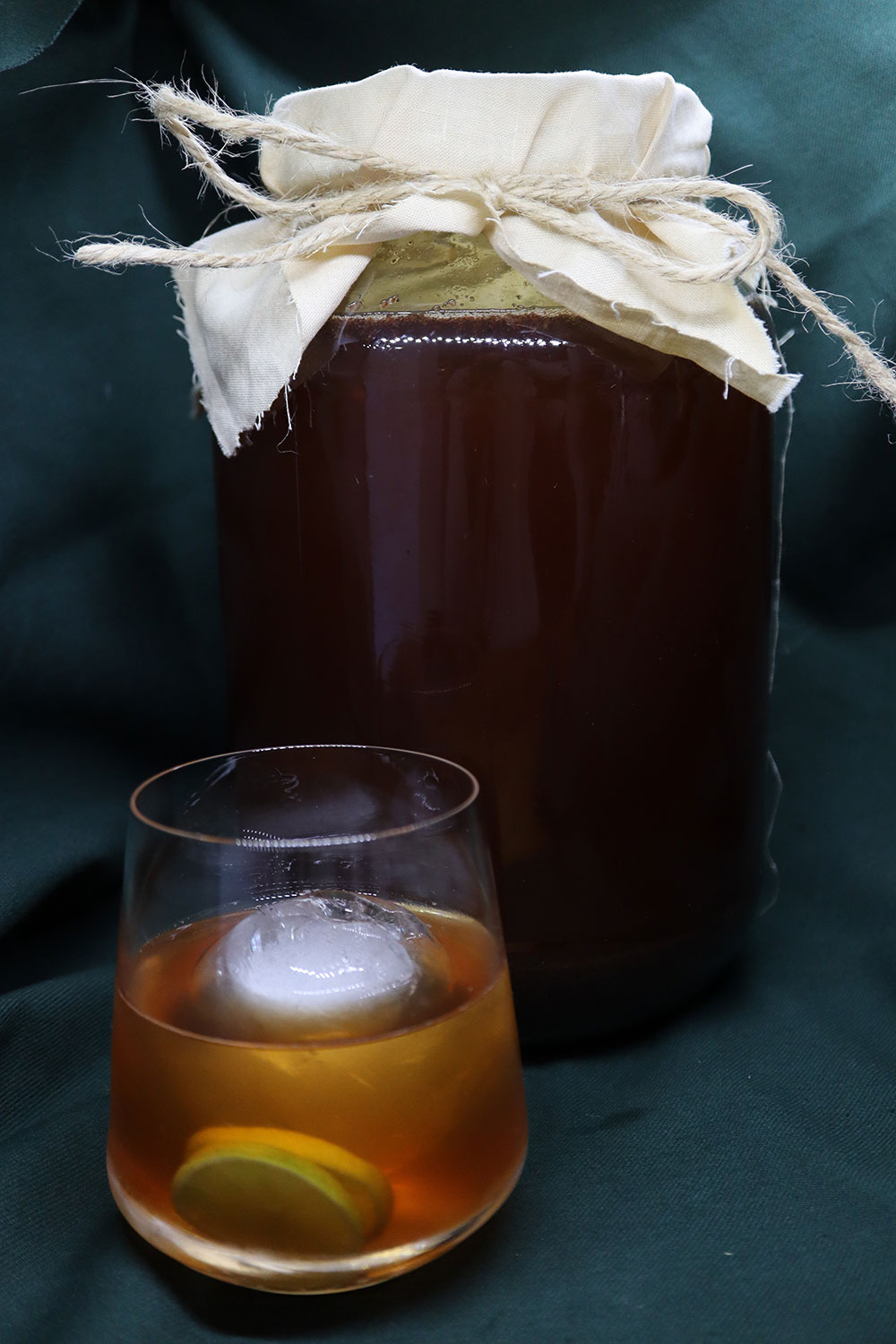 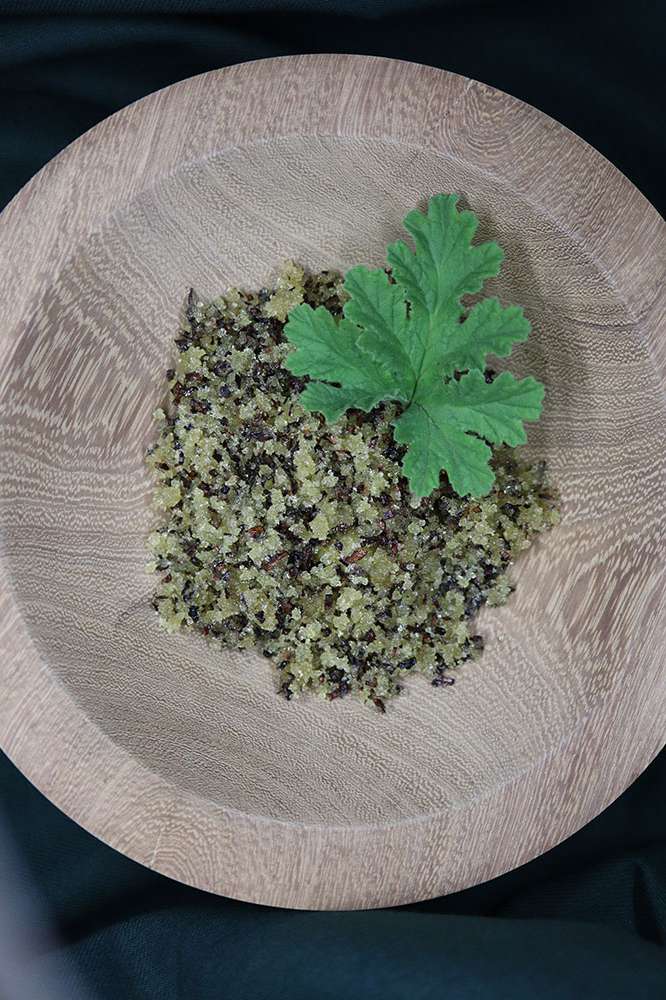 Sweet ferment:
Tea brewed from honeybush can be further fermented with SCOBY (symbiotic community of bacteria and yeast) into a delicious caffeine-free kombucha. The natural sweetness of honeybush works well to balance the usually sour kombucha, resulting in a very well rounded and satisfying probiotic drink.

Kitchen pantry scrub:
Honeybush tea can also make for a great topical scrub, doubly advantageous as the antioxidants make contact with the skin. For this recipe Elzanne used honeybush tea, heated with marula oil and beeswax to activate the extraction of the antioxidants in the tea. This mixture, when cooled, was simply blended with sugar to make for a luxurious skin scrub.

The sweet smell of possibility

There’s a new scent in the air. It’s sweet and complex and full of possibilities – and we’re not the only ones to take notice. Honeybush isn’t an overnight food craze that’s here today and gone tomorrow; it has staying power for all the right reasons. Although Covid-19 has severely impacted markets, making it hard for new entrants like us to gain a foothold, we’re still hopeful and, as usual, in it for the long game.

Currently, we have stocks of honeybush in the Langkloof waiting to be sold. We hope to attract interest from non-typical buyers who care about the who, what, and how of honeybush’s origins, and want to be forerunners in its story.

If you have a brand or own a company and would like to try our honeybush, get some taste samples, or chat to our expert team about its possibilities, please contact us!