What happens in our soils,
and why do we care?

When you pick up a handful of dirt from your garden, you are holding more living organisms than there are people on Earth. Underneath your feet is another world of living organisms—eating each other, fighting for resources, working together to survive.

The world beneath you

When you pick up a handful of dirt from your garden, you are holding more living organisms than there are people on Earth. Underneath your feet is another world of living organisms—eating each other, fighting for resources, working together to survive. There are the microorganisms like fungi, bacteria, protozoa and nematodes, and then there are bigger ones you can see with your naked eye, like earthworms and ants. Everything you see above the ground—all the grasses, plants and trees—depends on what exists below the surface.

None of the green stuff would be here without the dirty brown stuff beneath it.

A plant uses solar energy to take CO2 from the atmosphere, extracting the carbon it needs to fuel its growth. But a plant can’t grow on carbon alone, it also needs nutrients only accessible in the soil.

Plants need two kinds of nutrients: macronutrients, like nitrogen, calcium and magnesium (which they need a lot of), and micronutrients, like chlorine, manganese and iron (which they need much less of). The problem is, a plant only has its roots to access them, so it strikes a deal with the soil: In exchange for a load of nourishment its roots, it feeds some of the carbon it took from the air back into the soil, offering sugars to the bacteria and fungi that live there. It’s a win-win. The health of the soil translates into healthy air, and vice versa.

In an ecosystem, plants and animals are recycled. Nature is efficient, and nothing is wasted. When a plant or animal dies, or when an animal eats a plant, the remains of either process eventually go back into the soil.

Humans have only recently begun to understand the complexity of this network, and its relevance to plant growth. And we’ve only just begun to grasp how we’ve been harming it. Agriculture, especially over the past 50 years or so, has taxed this perfectly calibrated system.

Humans have only recently begun to understand the complexity of this network, and its relevance to plant growth

Soil that has lost the intricate web of species that makes it fertile ground for plants, we call degraded soil.

It is harder for plants to grow in degraded soil, and harder for plants to shuttle carbon from the air to the soil. Both the atmosphere and the ground suffer because of it. With fewer plant roots and fungal webs to hold them, the structures of these soils also change, and soils sitting on slopes become vulnerable to erosion. When the topsoil goes, so does the richest organic matter.

Essentially, soil degradation is a negative feedback loop—the opposite of the circle of life. In this cycle, fewer creatures exist to make nutrients available to plants, and fewer plants survive, which means less food for soil creatures, etcetera.

Essentially, soil degradation is a negative feedback loop—the opposite of the circle of life.

It gets worse and worse.

How we got here

If it’s the basis for life on earth, why have we degraded our soil? It’s probably easier to stick to how it happens.

Firstly, we have created single-direction agricultural systems. We plant one crop on a field and harvest everything, which also means removing all the nutrients the soil once traded for sugar in the well-balanced ecosystem. When the harvested plants get consumed elsewhere, it’s doubly bad—nothing ultimately returns to the soil, not even in the form of waste.

Do this repeatedly with the same crop on the same piece of land, and a field is eventually stripped of the vital nutrients it once had in natural abundance.

Other enemies of healthy soils come cleverly disguised as time and energy-saving tools. Ploughing with heavy machinery may make labor easier, but machines actually destroy the delicate networks established by fungi and the roots of plants.

The rampant use of so-called crop-protection is another costly modern-day agri invention. Sold by companies as pesticides, insecticides, herbicides or fungicides, they are, in fact, poisons. Sure, they are extremely effective at killing the pest, insect or weed doing harm to a crop, but they indiscriminately harm everything else, including other life that supports plant-growth, and the natural competitors of harmful organisms.

The division between animal and crop farming is another feature of modern farming that makes life hard on the ground. Nowadays, animals are absent in most crop-farming systems; meanwhile, in many areas of the world, intensive livestock farming and the ensuing overgrazing, leads to heavily degraded soils.

In natural ecosystems, animals and plants work together: Animals trample the soil, thereby improving its structure as they graze; they eat and digest plants, putting them back to work as natural fertilizer through their droppings.

These destructive habits tax farmlands and ecosystems the world over, and although we can see that these man-made methods affect our own environments and productivity in the long run, we’re so bound up in them that it doesn’t occur to most of us we can change course. Instead, we’ve developed more man-made solutions to try and rectify the problem.

Fertilizers are a case-in-point. Like a lot of our ‘remedies’, these come with a truck-load of troubles of their own. Typically, fertilizing involves applying just a few macro-nutrients that we are certain a plant really needs, leaving deficiencies in other vital nutrients. To top it off, fertilizers don’t come cheap—definitely not in terms of their environmental costs. 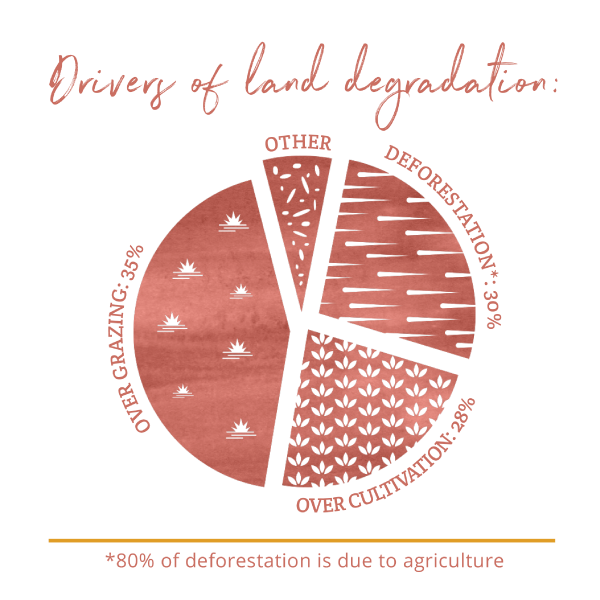 So how do we grow food in the modern world? Do we have to renounce the use of machines and retreat to the Dark Ages of agriculture? Do we have to treat the ecosystem like a museum—touching nothing, taking nothing away?

So how do we grow food in the modern world? Do we have to renounce the use of machines and retreat to the Dark Ages of agriculture?

There is another way with regenerative agriculture.

It’s possible, for instance, to plough more shallowly and less frequently. Instead of tilling to aerate or using pesticides and chemical fertilizers, we might establish a cover-crop—a crop that grows between cycles of the main crop, or between rows of the profit-making plants. This helps feed the soil and supports its natural web.

Crop rotation means sowing and harvesting different plants from year to year to keep the soil naturally conditioned with a variety of nutrients.

Instead of chemical fertilizers, farmers can use compost or compost tea from waste material on the farm as a way of cycling nutrients back and supporting new plant growth.

Even animals can be part of the solution. If livestock are regularly rotated between fields and moved before they impact it too heavily, they too can help fertilize and improve soil structure.

These are just some of the practices frequently used in regenerative agriculture, a way of farming that considers the health of the soil as much as it does crop yields.

Plants are part of a much bigger cycle than the soil lifecycle: they are part of the carbon cycle. Remember how we began with explaining how plants use photosynthesis to capture CO2 from the air? When the health of the soil is compromised, so is a plant’s ability to capture CO2. Losing soil-quality also means losing the earth’s natural defense against climate change.

This isn’t an abstraction—we become immediately vulnerable to the secondary effects of climate change. Natural disasters like floods and droughts are exacerbated by poor soils that give-way too easily or lose their sponge-like function to hold water.

The positive knock-ons of restoring our soils are infinite—it is, quite literally, the foundation for life on Earth.