Back to the Baviaanskloof: Attempting to fix what failed & fighting for regenerative agriculture

Even with the farmers’ profound generational knowledge and a variously skilled, highly committed international team, there were huge holes in our plans to bring economic and environmental change to a region facing all the challenges of agricultural transformation in this era.

This is the second story in the Baviaanskloof blog series, where we zero-in on the mistakes we made as we sought to support farmers in their move towards regenerative rosemary and lavandin crops for essential oils, and away from goat farming, which caused huge degradation in the landscape. We think it’s useful to share the lessons we learned to demonstrate that switching farming methods and restoring a degraded landscape takes patience and the continual confrontation of obstacles. In order to help the entire regenerative farming community move forward, we believe it’s important to be open about the difficulty of large-scale agricultural transformation. And since not all our endeavours have resulted in the desired outcome, not all the stories we share will be stories of success. We hope you appreciate our honesty, and benefit from our mistakes.

Please note that this piece is written from our own perspective, as Grounded. As much as we have tried to do justice to the point of view of our partners, there are the inevitable limitations of perspective. Nevertheless, we believe these lessons are worth sharing.

Here’s a break-down of what went wrong:

Too big, too fast

Convinced we had the ideal conditions and a robust species, we started off planting huge fields (three fields with about 30 ha in total) of lavandin. But, for a variety of reasons, the crop just didn’t do well. On paper, it was perfectly suited; in practice, it didn’t take root—not at the scale we accounted for. Two to three years later, we gave up. After replanting and trying everything we could think of to save the fields, in the end, we were forced to write all of them off. 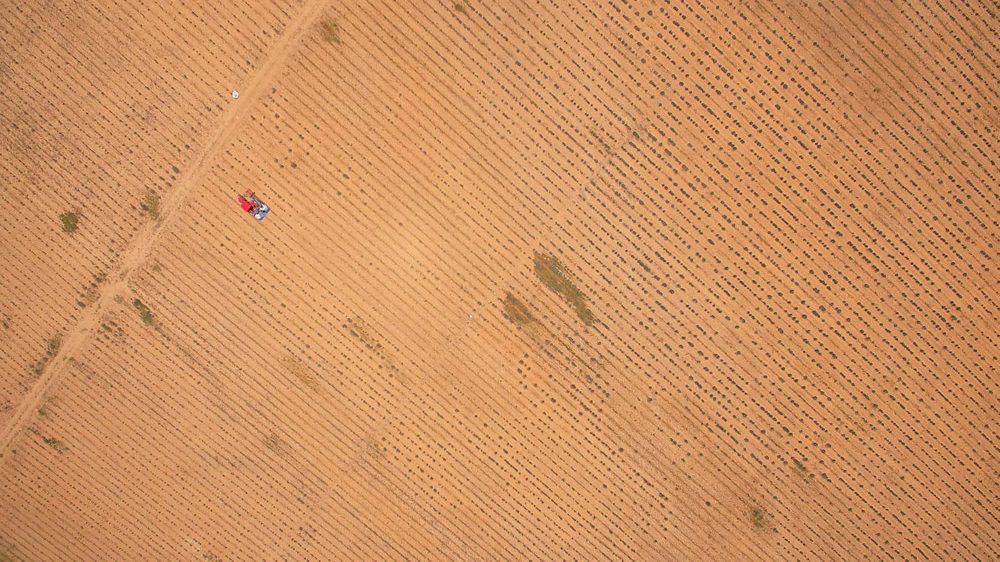 Planting the equivalent of 30 soccer fields of lavandin, the farmers dove into the deep-end.
Photo credit: Gareth Hubbard

Despite a few setbacks—including a massive outbreak of cutworm that killed almost 60 percent of one farmer’s crops (we had been told cutworm doesn’t eat rosemary)—overall, the rosemary was productive. However, we soon learned that the variety we chose wouldn’t reap best financial returns. For both the oil and the dried yields, another variety would have been better than the one to which we had dedicated 30 ha of land.

Humans have only recently begun to understand the complexity of this network, and its relevance to plant growth. And we’ve only just begun to grasp how we’ve been harming it. Agriculture, especially over the past 50 years or so, has taxed this perfectly calibrated system.

The leap to organic

The farmers not only had to learn to grow a new crop with a new kind of irrigation (drip irrigation, which had not yet been used to scale in the area), they also had to adopt organic and regenerative farming principles in order to meet organic certification standards. This is really hard. Looking at the rules of organic farming when you begin, all you see are things you can’t do—all of which were acceptable in the old system. No herbicides—if you want to have clear rows between your crops, you need to weed by hand, which is costly. No pesticides—if you have a nematode problem, you sit with it. You can use organic products to grow your crops, but which ones? Many are very expensive. How do you get the economics to work? 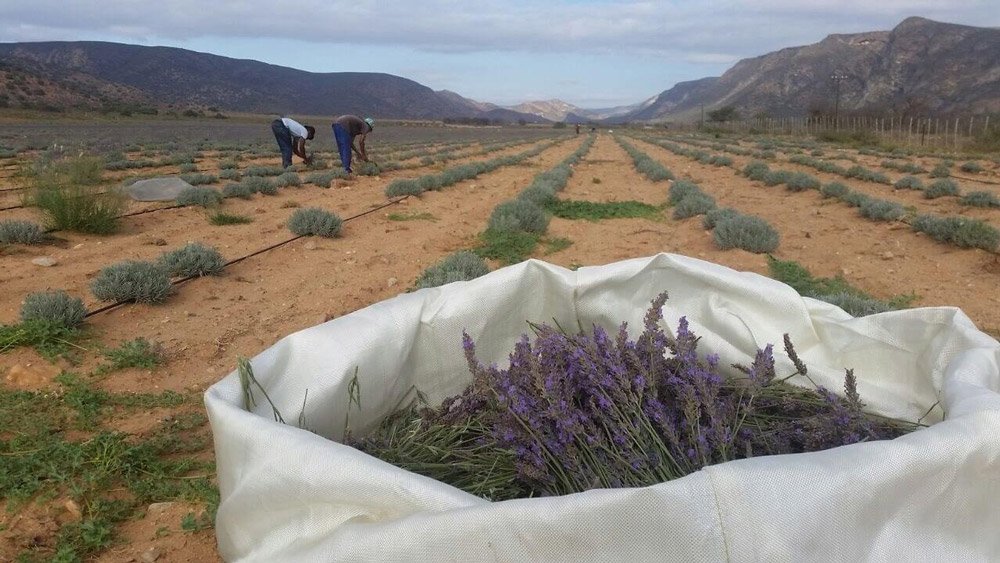 Since we would be planting 100 ha of essential oil crops, we expected big yields. We wanted to be prepared, so we invested big in a processing facility before the crops even grew. It was a wonderful piece of machinery—entirely stainless steel and housed in a beautiful building. But when the lavandin crop struggled that first season, and it was clear we wouldn’t be getting a sufficient harvest any time soon, it soon seemed like the big, shiny beast was a bit too big and shiny. 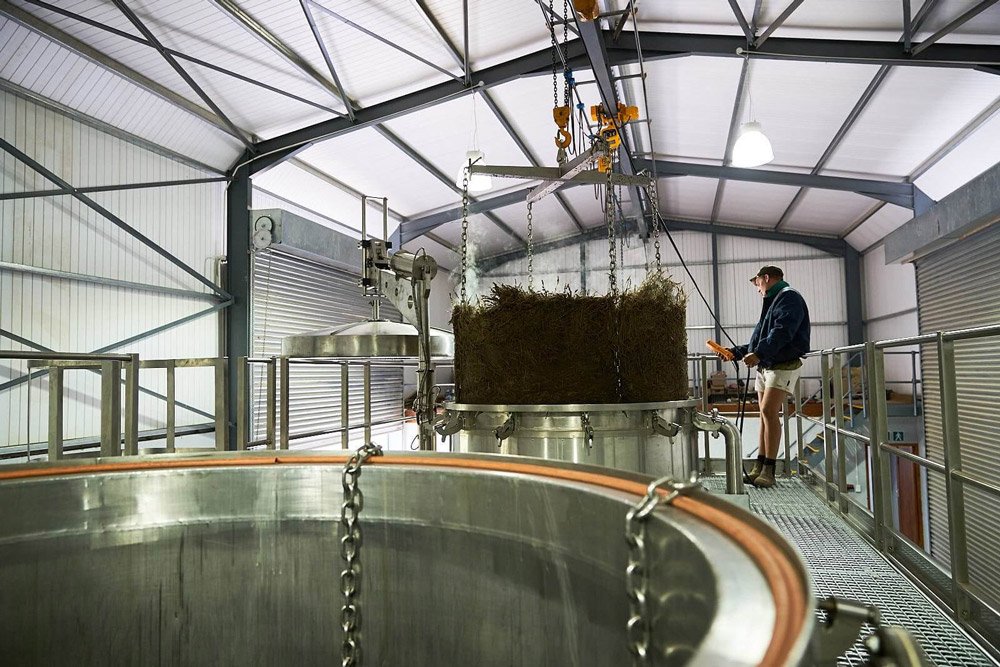 We planted on extremely degraded soils

Because our advisors told them that lavandin can grow anywhere, the farmers set aside their poorest fields to establish the new crops. We later discovered the soils were infested with nematodes; turns out, there’s bad soil, and then there’s nematode-infested soil. Farming the conventional way, you can kill off harmful nematodes with a poison, but with organic farming, it’s very hard to get rid of them once you’ve established a crop. They affected the yields in a big way. 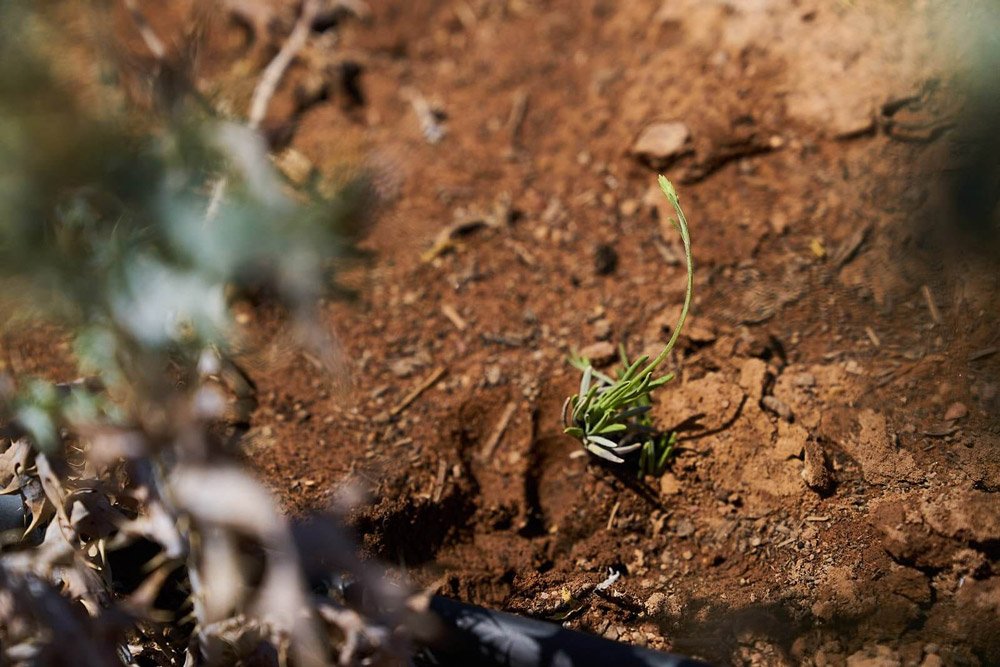 There were several small triumphs in this process, but not achieving our hoped-for scale was the biggest let down.
Photo credit: Gareth Hubbard

We made a lot of mistakes (many more that I can recount here), but the biggest blow was that the farmers—who had risked so much to transition to a more sustainable way—wouldn’t be rewarded by their essential oil crops the following seasons. At least not substantially. I think it is fair to say that we failed in that regard.

The biggest blow was that the farmers—who had risked so much to transition to a more sustainable way—wouldn’t be rewarded by their essential oil crops the following seasons.

Yet, despite the disappointments, throughout this process, the bigger dream of restoring the soils and creating a long-term agricultural solution still held promise for the farmers of the Baviaanskloof Devco, the investors who had long-term returns in mind, and the management team who kept refining their models.

For me, stepping into the role of Managing Director of the Baviaanskloof Devco when the previous manager left in 2016, was a big responsibility—first, to try and undo some of the mistakes we had made, and then to actually make the company work for the farmers who trusted us. And all this without any experience in the industry…we all had to learn together. 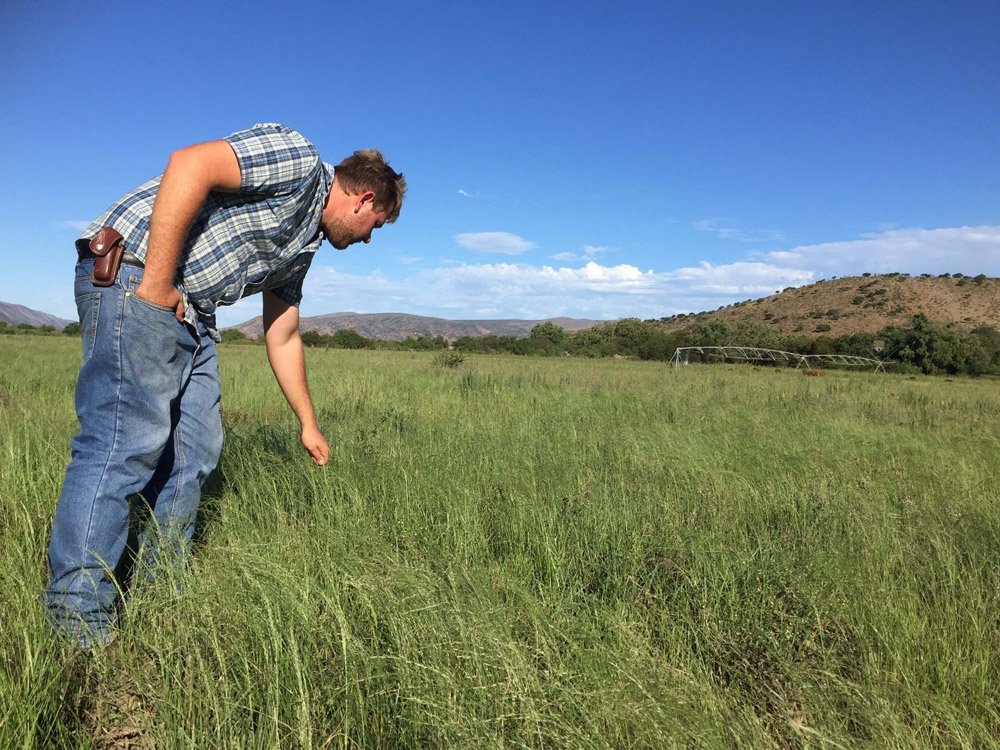 Daniel Fourie, in a poly-crop field of rosemary and various cover crops.

Things started to take an interesting turn for farmers of the Baviaanskloof in 2018, when Daniel Fourie came on board as a general manager. He was a self-taught expert on regenerative agriculture, and passionate about restoring soils.

Through the Baviaanskloof Devco, Daniel set up the production of organic fertilizers and compost at the essential oil distillery. With the help of Living Lands and funding from the Dutch Postcode Lottery, which was intended for large scale rehabilitation of the degraded land in the Baviaanskloof, he kickstarted a regenerative farming program open to all the farmers in the valley.

The plan was perfectly symbiotic: plant new crops that could restore the soil, while using the farmers’ small livestock to protect and support it. The goats and sheep avoided the essential oil crop, feeding instead on what grew between them, while simultaneously eliminating pests that threatened the crop and fertilizing and aerating the soil.

At the same time, cover crops were established and compost tea applied. The results were visible: life started to return to the soil.

This holistic approach allowed for integration between the regenerative farming activities in the valley, and the rehabilitation activities on the degraded slopes.

3000 hectares of degraded hills are actively being restored, with another 35 000 ha under improved management. Today, 121 ha of cultivated land in the valley now adhere to regenerative farming practices.

The programme gained traction throughout the area, and today around 3000 hectares of degraded hills are actively being restored, with another 35 000 ha under improved management. Today, 121 ha of cultivated land in the valley now adhere to regenerative farming practices.

The cumulation of mistakes and setbacks consumed all the capital reserves of the Baviaanskloof Devco before the business model could prove itself, forcing the company to cut back to skeleton operations. Today, the focus is on the production of the fields that are working well—rosemary, mainly. The company still keeps an eye on the bigger vision of regenerative agriculture in the valley and mountains, and works closely with the Baviaanskloof Hartland Bewarea, a conservancy made up of landowners in the area. Although I stepped back as Managing Director at the end of 2019 due to a prolonged illness, I am still keenly interested in the situation in this area, and the wellbeing of the people who live and farm here. Grounded remains involved with the company, in the marketing and sales of its products.

In the end, many things need to work for a company to thrive. If you get it seventy percent right, you can still have a zero net result. A cumulation of setbacks, mistakes, wrong advice, droughts, deceptional buyers, and a scale that was just too big to absorb the costs of these mistakes, have simply been too much to overcome. Even if our model was sound, it was too big a gamble to implement radical change so quickly, especially as success was reliant on untransparent and highly demanding export markets.

A long-term shift of the agri-economy in this area was and is needed, but a more gradual transition—building on what is already in place, and taking incremental steps—would have been more effective. There is still something to be said for big ambition, however, to inspire both investors and farmers to embark on the journey in the first place. In a world that celebrates moving fast and straddling the edge of risk, who still dares to think big, but also start small and be patient? No matter how many people stand around a rosemary plant and urge it to grow, you can’t start harvesting it, or even know what your yield will be, any sooner than two years.

In a world that celebrates moving fast and straddling the edge of risk, who still dares to think big, but also start small and be patient? 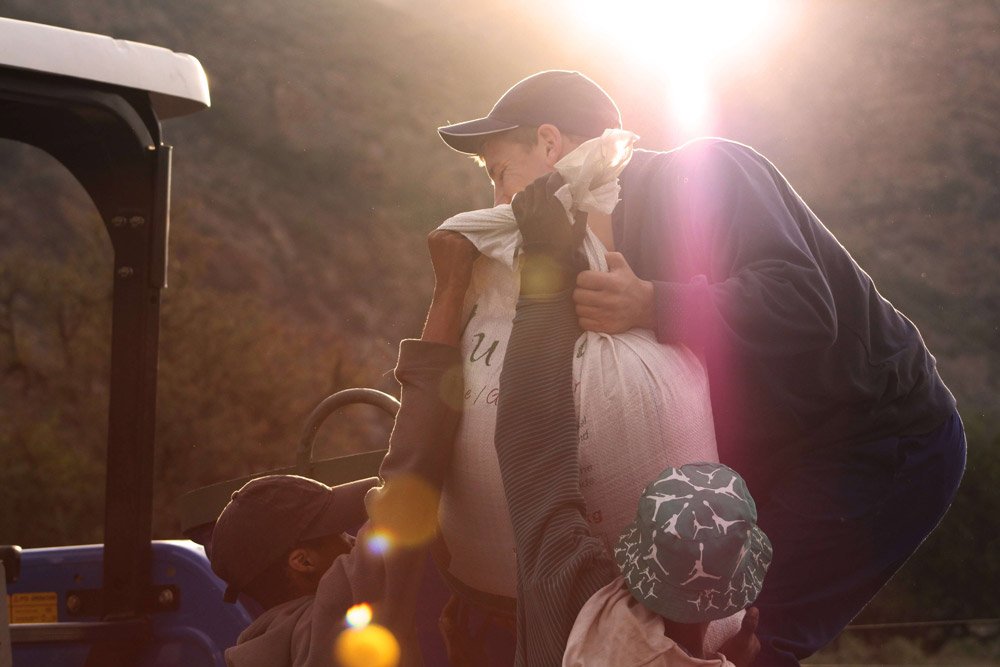 For generations, the community of the Baviaanskloof has been sharing in their struggles, triumphs and losses.

Despite the setbacks, it’s important to keep in mind how far everyone has come. In the days of apartheid, farmers were getting economic incentives to overstock their fields with goats and sheep; now they get incentives to manage the regeneration of their soils and vegetation on the mountainsides. Instead of outsourcing this work to NGOs or government, farmers are the expert implementers of restoration in the area, which in so many ways closes the loop. It means the Baviaanskloof builds upon and retains this vital knowledge, and the financial capital of restoration.

All the farmers see the tremendous benefits of regenerative agriculture for the health of their soils. Thirty percent of the land that was once classified as degraded, has been put into active restoration. Now, prosperity in the landscape must just be turned into hard cash.

Click here for part three in this series, where we dive into the markets and the challenges of matching products with the right buyers.

Are you looking for a specific ingredient? 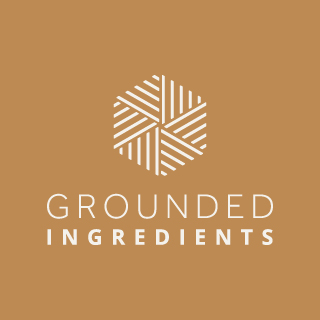